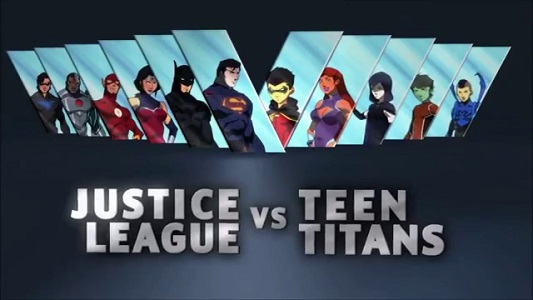 Anticipation is growing for the ultimate showdown in the upcoming Batman vs Superman: Dawn of Justice movie that set to release March 25, 2016. But that is not the only battle between heroes in the DC Universe. On April 12, 2016 DC Animated will bring you Justice League vs. Teen Titans.
2 of the most popular superhero team will face off, and we're sure it will be one for the ages. With such films as the Flashpoint Paradox, Crisis on Two Earths and Doom the list Justice league features are well known for bring a high level of quality the small screen and we're sure this next film will not disappoint.
After Robin's volatile behaviour causes the failure of a Justice League mission, Batman sends him to work with the Teen Titans. But shortly after the Titans are forced to face Justice League and who's been possessed by Trigon and threatens to conquer the world. Is the young team ready for such a challenge?
Look for the release of Justice League vs Teen Titans April 12, 2016 on Blu-Ray and DVD
In the meantime, click here to see the trailer.
Previous Post
Next Post
Quick View