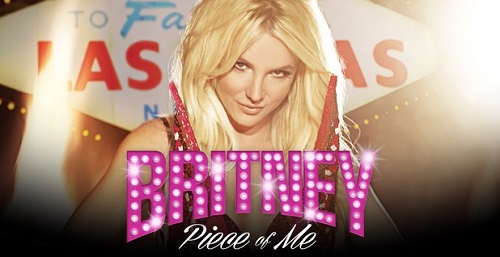 Here are the Park, we enjoy all facets of entertainment. and recently we had the opportunity to see one the biggest music stars perform in Las Vegas. It seems what once was old is new again and music stars are taking their talents to Las Vegas. Britney Spear is no exception as her Piece of Me show at the Axis in Planet Hollywood is one of, if not the top shows to watch while you are there.
The lobby area of the Axis theatre is fairly bland, there are a few costumes on display from various videos and a couple of souvenir stands and then concessions before you enter the actual theatre. In terms of what you can find, it's your typical stand, program, shirts, hats, posters, etc. nothing overly exciting and prices are in line with other concert venues. $30 program, 40$ shirts, etc. One thing which was very cool was the red carpet treatment you get just before going downstairs to the lobby. You get your photo taken in front of a nice banner to signify your appearance at the show. You can pick up your picture after the show, but what you don't know until then is that they want $40 for it....ouch. Too expensive for this ranger. But it does some in a nice little frame-book so maybe for others it's worth the price.
We did pick up a cool glass with our beverage which is exclusive to the concession stand and show....so that was worth it given we were drinking anyways.
The venue itself is smaller, I think it seats about 5K people and the audience is quite varied. From 1st glance you wouldn't expect half the people to be a Britney Spears show. Goes to show how wide her appeal is, as well how the stigma of a Vegas show can draw anyone. As well, the manner of dress is also as varied as the audience. From those who appeared to haven just woke up to those who spent the day preparing and were dressed to the nines. I think it's dress as you feel, but edge more to the elegant style rather than soup kitchen.
Given the smaller venue, the show does have more of that intimate appeal, unfortunately Britney doesn't interact with the audience much. Aside from a couple of shoutouts and one time she invites a member on stage to do a song with her. Though that felt more like a plant than picking a random fan.
Her song selections are definitely a greatest hits package so if you enjoy Britney Spears, you'll get the top of the top songs here. ...Baby Onoe More time, Womanizer, Everytime, Crazy, If you Seek Amy, Circus, 3, Opps I did it Again, Stronger, Work Bitch, Perfume, Boys, Slave 4 You, just to name some of the songs which she performs. It's mixed into a few different elaborate sets with some costume changes too help keep things fresh.
I have to admit the choreography is great, she's got some very talented dancers working with her. and the set designs are amazing with awesome background video/effects. Love the giant tree and guitar an the video with the plants were top notch. Mixed in very well with the songs.
Before you know it, the show is over, hard to believe she does something like 24 songs. but it flew by in my opinion.
I was taken away with the show, though it was great and had an amazing time. I left happy and felt a little bit energized which can be dangerous being in Las Vegas. :)
Here are a couple of pics I took during the show, and a video I was able to take as well. Apologies for the poor quality in advance. Hope you enjoy and please feel free to share your comments below.
Click here for the video 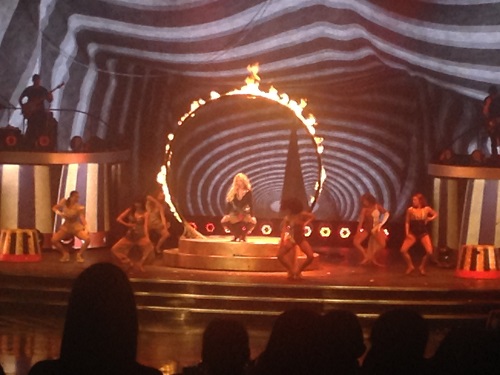 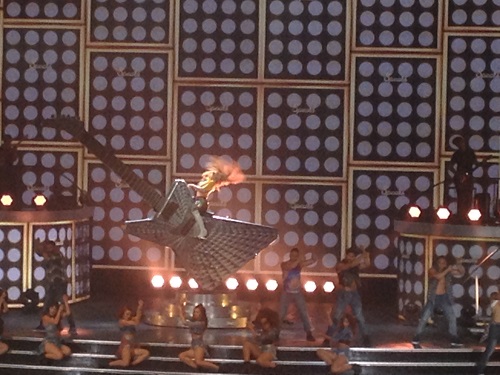 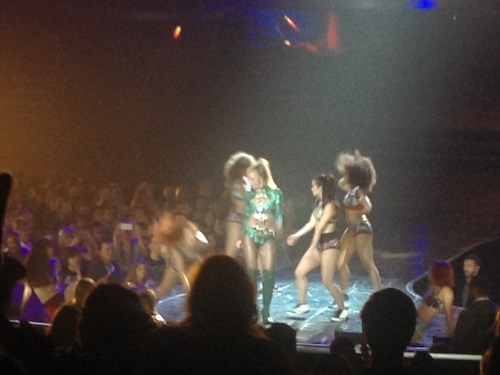 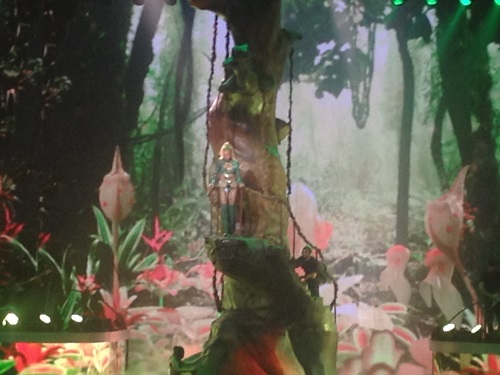